The Spinning Room
ABOUT US

JOHN C. METZ
CEO, Executive Chef & Co-Founder
As CEO, Executive Chef and Co-Founder of Marlow’s Tavern, the Woodall, Aqua Blue and Hi Life Kitchen and Cocktails, John C. Metz has long thrilled residents in the Atlanta area with cuisine that inspires. Trained by the best, John earned his degree at the Culinary Institute of America. He began his long-standing career at some of the finest restaurants in New York such as The 21 Club, Tribeca Grill, Park Avenue Cafe, Montrachet and Restaurant Daniel. Not only integrally involved in his own ventures, he is also heavily involved in the restaurant community. Currently, he serves on the Board of Directors of the National Restaurant Association and was appointed as Vice Chairman 2005 for the Distinguished Restaurants of North America. 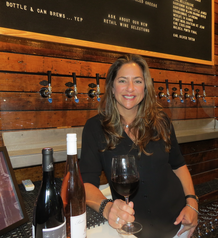 ROBERTA NEMO
CSW
Roberta Nemo is an American Society of Wine Educators Certified Specialist of Wine and restaurant industry veteran. She began her career in restaurants at 14, working as a dishwasher before quickly being promoted to prep cook, then on to host, server, bartender, and manager, before becoming an owner. During her career, Nemo has worked with hotels, country clubs and fine dining restaurants, developing a passion for hospitality, food and wine.  Nemo has served as the Assistant Sommelier at Canoe in Vinings, Georgia, as well the General Manager and Wine Director for Aria in Atlanta. Today, Nemo uses her passion and extensive knowledge to develop the wine list for Marlow’s Tavern and the Spinning Room. RICK BLUMBERG
​CSW, Manager of Adult Beverages
Blumberg is a seasoned veteran in the hospitality industry for 30 years.  A graduate of The Pennsylvania State University with a degree in Hotel, Restaurant, and Institutional Management has found his calling in the restaurant business.  He has worked in hotels and restaurants from Pennsylvania, Washington, D.C., Atlanta, all the way to Florida.  With 16 years as a General Manager in some of Atlanta’s top restaurants, such as, Morton’s The Steak House, Restaurant Eugene, and Woodfire Grill. Blumberg has won several awards as General Manager including opening three no.1 Best New Restaurants in Atlanta: Holman and Finch, Abattoir, and The Optimist (7th in the USA-Food and Wine Magazine).  Rick’s most prestigious award comes serving as Beverage Director and Sommelier with restaurant greats Anne Quatrano, Clifford Harrison, and Francis Quatrano at Bacchanalia where the team was a 2016 James Beard Semifinalist for Best Service. If you’re searching for wine advice, Blumberg is a good person to go to.  Becoming a level two Certified Sommelier with the Court of Master’s in 2007, he takes a humble approach when asked about his food and wine knowledge.  He will customize each suggestion based your likes, and always offer the best value.

BRENT RABREN
Vice President of Operations & Development
Brent’s career in food and beverage started in 1997 with a strong passion for food and customer service. Following in his father's footsteps, he grew up busing and setting tables in restaurants his father managed. At the age of 18, Brent accepted his first management position in the hotel industry. Since then Brent has expanded his knowledge studying Hotel Restaurant Management and Business Management. He has had extensive knowledge and experience with Darden Restaurants, Healthcare, NASCAR, and most recently with Aramark. Brent's passion for food and strong leadership proved to invaluable and he was the first individual to be awarded the R.O.C.K award in 2013. Brent also developed an Executive Leadership Council focusing on developing young leaders while working toward their goals as professionals.